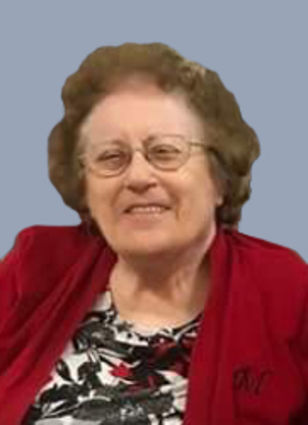 She was born in Ironwood, Michigan, Aug. 14, 1932, the daughter of Walter and Katherine (Armata) Wierzbicki.

Marian was a lady of strong faith and a member of St. Mary's Catholic Church. She was a loving wife, mother, grandmother and homemaker. In her free time, she enjoyed knitting, shopping, trips to the casino, cooking, especially making her homemade ravioli and pastas; and she enjoyed her time spent caring for her parents.

She was united in marriage to Roderick Backlund and together they had seven children before his passing in 1973. Marian was remarried to, Joseph DeMeio, who passed in 1983, and Al Olkonen, who passed in 2000; they were a blessing to our family.

She is preceded in death by her husbands, Roderick, Joe and Al; grandson, Benjamin Backlund; and her parents.

The family would like to extend their heartfelt thanks and appreciation to Amelia Vernetti, Mark (Donna) Lipski, and the staff at Twin Ports Health Services, for the wonderful care and support they provided.

Due to CDC regulations and Governor mandates, services for Marian are pending for a later date at St. Mary's Catholic Church in Hurley.

The Lenroot-Maetzold Funeral Home, 1209 E. 5th St., Superior, is assisting the family with arrangements. To leave a condolence or sign the guestbook, visit our website at lenroot-maetzold.com.