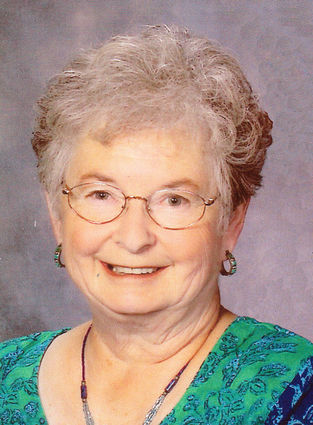 Due to COVID-19, a private family service was held at Greenwood Cemetery on Friday, July 10, with Father Andy Ricci of Superior Cathedral Catholic Church officiating.

Rita was born on Jan. 14, 1930, in Ironwood, Michigan, to Jack and Ann (Voitek) Pavlinski. She graduated from Luther Wright High School in Ironwood in 1948. She was always proud of the fact that after graduation she boarded a train in Ironwood and traveled to Chicago, to attend banking school. After her schooling, she worked at Talman Federal Savings and Loan in Chicago until her marriage to James Rainaldo on Oct. 24, 1953. After their wedding they moved to Superior so Jim could finish college following four years in the U.S. Navy. They enjoyed 57 years of marriage before his passing in 2010.

She was most proud of her role as a stay-at-home mom until their four children finished school. Afterwards she returned to work part time at the University of Wisconsin-Superior bookstore, as well as bookkeeper at Fran's Color Corner.

After they retired, they spent 17 winters together in Sun City, Arizona, and during that time they did extensive traveling of the lower 48 states as well. They both enjoyed road trips. After Jim's passing, she spent an additional seven winters in Sun City. Rita had a kind heart and enjoyed volunteering. This included her membership in the Gordon Post 499 of the American Legion Auxiliary, where for many years they tied quilts for the veterans hospital. She also volunteered for 21 years at the Valley View Community Food Bank in Sun City. In addition, she enjoyed skating and was a member of the Superior Ladies Skating Club. She was an avid reader and was a dedicated daily walker of several miles a day.

She is preceded in death by her husband, James; son, Thomas; sister, Irene; and her parents, Jack and Ann.

At the time of her death she was a resident at New Perspectives Assisted Living Facility in Superior. The family would like to thank the administration and staff at New Perspectives that provided a warm and family like environment during her two-year residency. Due to COVID-19, the family was unable to be with our mom during her last days. Therefore, we also have a "special thanks and appreciation" to all the staff at St. Luke's Medical Center as well as the staff at Waterview Shores Nursing Facility in Two Harbors, Minnesota. The staff at both locations that attended to our mom during her hospital and brief hospice stay, saw to it that she passed in a peaceful way. We are indebted to you all. Thank you.

The Lenroot-Maetzold Funeral Home, 1209 E. 5th St., Superior, assisted the family with arrangements. To leave a condolence or sign the guestbook, please visit our website at lenroot-maetzold.com.

If friends and family so desire, memorials may be made to Valley View Community Food Bank in care of Lenroot Funeral Home in Superior.