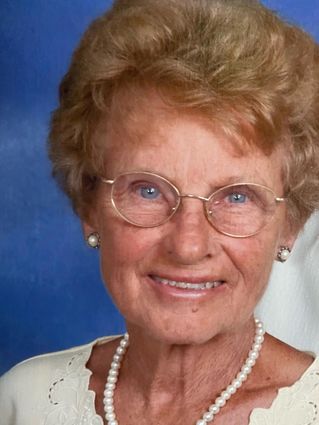 ANN ARBOR, Mich. - Annabelle Georgathena Yesney, 86, died Sunday Oct.4, 2020, at the University of Michigan Medical Center in Ann Arbor. She was born Feb. 20, 1934, to George and Hedwig (Franzel) Korich in Bergland. She was the second oldest of six children.

Annabelle moved from Bergland to "the farm" in Topaz at age 11. There she gained a strong work ethic and love for baking, gardening, cooking and as a seamstress. At age 16, she won the Upper Peninsula 4-H apple pie baking contest. She then travelled all the way to Lansing via train to compete in the statewide contest where she finished third. The following year, at age 17, she won the Upper Peninsula contest again and again travelled to Lansing. During this second trip, she was in first place during the final round when her pan broke coming out of the oven and she did not place. Anyone who met Ann knew that she was in her element most in the kitchen.

She graduated from Bergland High School in 1954. After high school, she and four friends (Betty, Little Betty, Alice and Chris) moved to Milwaukee where she worked for American Appraisal in administration.

A short time later, during a trip home to the farm, she met her future husband, Ronald Keith Yesney. After marriage, they began their family in the Western U.P. with the birth of daughters Lynn and Gaylann, and son Keith (Sam). The young family then headed west, with Ronald working for Boyle's Brothers Drilling Company and the family living in Montana, Nevada, California, Utah, Washington, Oregon, New Mexico, California and Missouri. They travelled the west in a 1957 Pontiac pulling a 36-foot house trailer. The stories of these travels are legendary. In Missouri, their third daughter, Cheryl, was born. In 1960, with four kids in tow, they sold the trailer and moved back to the Upper Peninsula eventually settling in Clarksburg. Here Annabelle was very involved with the community and supporting the Diorite School. She and her peers created an Ely Township cookbook and sold advertising and books to raise money for the school and children's events. In 1968, their fifth child, Ronald, was born in Ishpeming.

In 1969, the family packed up and moved to Harrison Michigan where they purchased a home at 122 W. Park St., where Annabelle's husband Ronald still resides. Also, in Harrison, they purchased half of Niemi and Company Excavating where they both worked until retirement and the sale of the company in 1987. She was a Girl Scout leader in Harrison and is famous for killing a rattle snake with a shovel that had gotten into the girl's tent. This was out at Canoe Camps.

Back to her Yooper roots - in 1988, Ann and Ron purchased a small cabin on Lake Gogebic in Bergland. The next seven years were spent as a labor of love adding onto the cabin and making many improvements. "The cabin" which has been the setting for many family gatherings and parties was one of Ann's favorite places. Here all of her children, grandchildren, siblings, and other friends and family would come to socialize, fish, hunt, and of course be fed. Ann was a selfless woman who loved to keep people fed and loved. She was never greedy, and just wanted to be loved and to love her family. She was happiest in the kitchen, sewing room, or her garden, and being surrounded by loved ones.

She loved to travel and to see the lakes and countryside throughout the country; she made trips to England and the Hawaiian Islands.

There is no object or thing that brought her as much joy as her husband, children, grandchildren, and great grandchildren. Ann was an amazing wife, mother, grandmother, mother in-law, and daughter. She always put others first and brought joy everywhere she went. She found her great joy in the "little things in life."

She was preceded in death by her parents and a sister, Mary Jean Dove.

Ronald and Ann were longtime members of St. Athanasius church in Harrison. Burial will occur at the Bergland Cemetery beside her mother and father. Funeral services are suspended at this time due to COVID. However, there will be a memorial service when things clear up.

In lieu of flowers, donations can be sent in Ann's name to the Bergland Matchwood Historical Society, P.O. Box 403, Bergland, MI 49910.

Stocking Funeral Home of Harrison will be serving the family, where condolences can be expressed on-line at stockingfuneralhome.com.