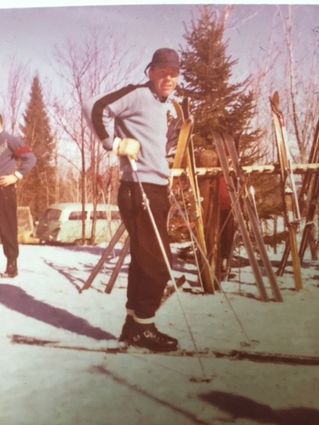 He was born in Ontonagon, Michigan, on Oct. 18, 1934, to Walter and Rose (nee Yaklyvich). He proudly joined the U.S. Navy right out of high school, bravely fought in the Korean War and became a member of American Legion Post 462.

Knox married the love of his life, Doris Ann (nee Olson), on April 24, 1961. In 1965, they moved to Waukesha, Wisconsin, to raise their family. Knox enjoyed his career as an electrical technician for General Motors in Oak Creek, Wisconsin, until his retirement in 1996. Upon retiring Knox and Doris returned to their beautiful home nestled on the shores of Lake Gogebic in Upper Michigan.

Knox raised his family with faith in the Lord. He was a man of respect; one of his many great qualities was that he always kept his word. Everyone that knew him would describe him as having had a "heart of gold." He was an avid outdoorsman who could put trout on the table no matter the conditions. He loved to ski on both water and land and was still hitting the slopes the winter after his 80th birthday! Even though his youth was behind him, he was still the most graceful skier on the hill.

Decades of unforgettable memories were made at the cabin on Lake Gogebic: boating, fishing, hunting, and family time around the warm campfires. Not many people get to experience Heaven without having met the Lord first, but waking up, looking out his window and watching the sun rise over Gogebic as the water lay calm as glass was his idea of it. Knox already lived in what he called "God's Country," the U.P.

A gathering will be held at the Becker Ritter Funeral Home, 14075 W. North Ave., in Brookfield, Wisconsin, on Friday, Nov. 6, from 2 to 4 p.m. A celebration of Knox's life will follow at 4 p.m. Out of respect for the family, we ask that everyone please wear a mask and practice social distancing. It will be available via live stream for those who are unable to attend physically at beckerritter.com.

Please consider donating in his memory to a cause Knox would love at porkies.org/donations.