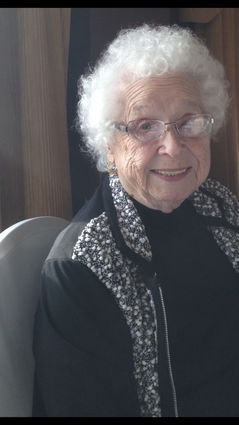 ROCKLAND, Mich. - Loretta Marie Hoffman was accepted into the loving arms of our Lord on Nov. 19, 2020. Her 98-year legacy of faith and family will forever be cherished by everyone she touched in her kind and giving way. The world lost a treasured mother, grandmother, great-grandmother and sister.

Loretta was born in Rockland on April 21, 1922, to Henry and Mary (Schmaus) Lohman (who passed when Loretta was 16). She graduated from Rockland High School in 1940.

Her talents included needlepoint and quilting, completing 30 cherished quilts for every family member. A favorite pastime was playing bingo at the Rockland Hall. Loretta and Maurice spent their life together, before and after retirement, on memorable adventures to Hawaii, Las Vegas, Branson, Washington D.C., as well as following the Detroit Tigers to various cities.

Loretta was truly involved with life in every good way and loved spending time with her family. She was a spiritual person devoted to her Catholic faith and a member of St. Mary Catholic Church for her entire 98 years.

She was preceded in death by her husband, Maurice; and beloved sister, Jeanette Pufpaf.

Loretta"s family would like to extend a special thank you to the staff at Aspirus Long-Term in Ontonagon for their compassionate and exceptional care given to our Mom.