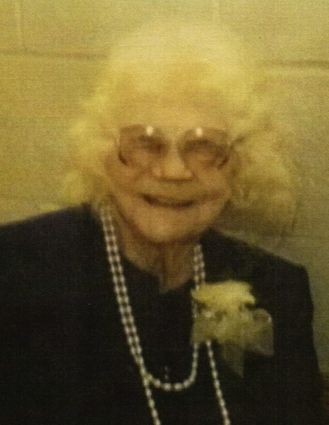 She was born Dec. 8, 1921, in North York, Wisconsin, daughter of the late Victor and Hilda (Martilla) Warren.

She married Eugene G. Kaartunen on Dec. 8, 1942, in Brooklyn, New York and moved with him around the country to where he was stationed while in the U.S. Army. She was a waitress in Ashland, Wisconsin and then was employed in New York City, Salt Lake City and Chicago. Locally, she was employed by Penokee Venier Plant, Mellen, Wisconsin and Hanson Glove Factory, Ironwood. She then became a homemaker for several years, returning to work for several area businesses and private homes until her retirement in 1989.

In 1981, she and Eugene made a trip to Finland to visit relatives there. She enjoyed spending time with her granddaughters and gardening. She loved animals, especially dogs. She found a talent in art and sketched portraits of family members. She was very handy in carpentry, and she and Eugene made many things together. She and Eugene also enjoyed their many friends they met while walking at the college and going to McDonald's.

She was a member of Trinity Lutheran Church in Ironwood.

Vienna loved to tease and loved when people would joke around with her. She spent the past three years at the Villa Maria Health and Rehabilitation Center in Hurley, Wisconsin. She was a fixture at the front door, greeting people as they came in.

We would like to thank the staff at the Villa for taking such good care of Vienna and being there at the end when we could not.

She was preceded in death by her parents; her husband, Eugene, of 73 years; one son, Gene Alan, in infancy; one brother, Kenneth Warren; four sisters and four brothers-in-law, Martha (Urho) Bjork, Alice (Ray) Bjork, Robert Lantta, Dorothy (Robert) Gaudreau and Barbara Scribner; and two sisters in infancy, Ruth and Lila.

Interment will be at the Greenwood Cemetery in Upson, Wisconsin.