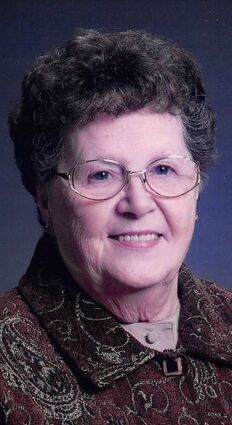 HURLEY, Wis. - Kathryn F. (Lundgren) Mieloszyk, 88, of Hurley, and formerly of Ironwood Township, Michigan, died unexpectedly on Sunday, Dec. 27, 2020, at the Sky View Nursing Center in Hurley, with her sons, Michael and Timothy, by her side.

Kathryn "Kappy" was born on Jan. 27, 1932, in St. Paul, Minnesota, and was the eldest of 13 children born to the late Henry and Margaret (Thomas) Lundgren.

As a young girl, Kathryn worked at the Hurley Ben Franklin dime store. Later in her life, when the Hurley Holiday Inn was constructed, Kathryn was hired to work there and stayed there right up until her retirement.

Kathryn was a member of St. Mary's Catholic Church in Hurley. Kathryn's greatest joys were helping to raise her siblings and raise her own family. She later enjoyed spending as much time as humanly possible with her grandchildren whom she adored. Kathryn was an avid reader and enjoyed word search puzzles. She loved baking, sewing and knitting, and possessed many other crafting talents. Her favorite place on earth was her family farm in Ironwood Township.

Kathryn was a wonderful wife, mother, mother-in-law, grandmother, great-grandmother and friend, who will be greatly missed by all who knew her.

Until we see you again, "love your face."

Out of respect for Kathryn's wishes, cremation has taken place.

Due to COVID-19, a celebration of life will be held in the spring.

Private interment will be in Sunset Acres Cemetery in Ironwood Township in the spring.

The family wishes to extend a heartfelt thank you to the staff at the Sky View Nursing Center for their support and devoted care to Kathryn while she was a resident there.

The family has chosen McKevitt-Patrick Funeral Home of Ironwood to honor Kathryn's legacy of life. You can leave a condolence or a tribute for Kathryn's family at mckevittpatrickfuneralhome.com.