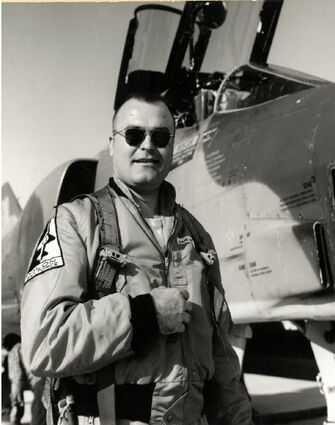 A 1956 graduate of Luther L. Wright High School in Ironwood, Dave received an appointment to the U.S. Naval Academy, graduating in June 1961. Aspiring from a young age to become an aviator, Dave chose naval aviation as his duty assignment and was assigned to NAS Pensacola, where he received his Navy wings on Dec. 7, 1962, joining the fabled Tophatters of VF-14, the oldest active squadron in the U. S. Navy. He flew F-4's in Vietnam off the USS Franklin Roosevelt. His awards included the Air Medal with four Gold Stars, the Navy Commendation Medal with Combat "V," Vietnam Service Medal with Bronze Star, Republic of Vietnam Campaign Medal with Device, the National Defense Service Medal, and the Expert Rifle Medal. Later, he served as a Navy flight instructor, compiling thousands of hours of flight time in a variety of Navy fixed-wing aircraft.

In 1968, Dave left active duty to pursue a career in civilian aviation but remained in the Navy Reserves until his retirement, attaining the rank of commander. He attended the Air Force Test Pilot School at Edwards Air Force Base in California, graduating in December 1971. Dave served as a test pilot for Northrop Aviation, where he led the certification of the F-5E Tiger II and supported the YA-9A and YF-17 programs. After Northrop, Dave became a test pilot for the Federal Aviation Administration, first in Wichita, Kansas; followed by Kansas City, Kansas, and then Atlanta.

In 1982, he was appointed chief of flight test for the Atlanta Aircraft Certification Office, a position he held until his retirement from the FAA in January 1997. His area of responsibility included the Southeastern U.S., the Caribbean and South America. During his tenure in Atlanta, he was responsible for numerous certification projects, including the Embraer 120 and the Gulfstream G-IV. Dave also served as the certification pilot for the 1992 U.S.-Chinese joint aviation venture in China, instructing Chinese pilots on U.S. certification procedures and flying the Y-12, an early Chinese aircraft. He was also a member of the FAA team that created TCAS II, a ground-proximity warning system used in commercial aircraft.

Following his service with the FAA, Dave continued his career in aviation by becoming a designated engineering representative and traveling extensively to perform certification projects on behalf of the FAA. He formed his own consulting company, TopHatter Aviation Inc., in 1997. His final project was as a certification test pilot on the HondaJet. At the time of his retirement in 2008, Dave held the following pilot certificates: Airline Transport Pilot, Multiengine Land: B-727, B-757, B-767, BE-300, CE-500, CV-A340, CV-A440, DC-9, EMB-120, G-1159, G-IV, and N-265. His commercial privileges included Airplane Single Engine Land, Glider Aero Tow, and L-T33.

Following his last retirement, Dave became a volunteer at Fayette Samaritans, a position he held for more than 10 years. He and his wife moved to Sun City Peachtree in Spalding County in November 2019. He was a member of Christ Church of Atlanta.

Dave's father taught him to play cribbage at the age of four, and he became a lifelong card enthusiast and a master of not only cribbage but also pinochle, bridge, Hearts, canasta and Spades. He also enjoyed cruising the world, non-Navy style.

In addition to his parents, Dave was preceded in death by his sisters, Ruth West Richards and Margaret West Hakari; and brothers-in-law, Loren Richards and Roger Hakari.

A memorial service will be held at Mowell Funeral Home in Fayetteville, at 2 p.m. on Saturday, Aug. 21. A reception and celebration of life will follow at The Train Depot adjacent to the funeral home.

Expressions of sympathy may take the form of donations to Fayette Samaritans, P.O. Box 1071, Fayetteville, GA 30214 or to the Navy Seal Foundation (navysealfoundation.org).

"He is a man, take him for all in all; you shall not look upon his like again." - William Shakespeare, "Hamlet"