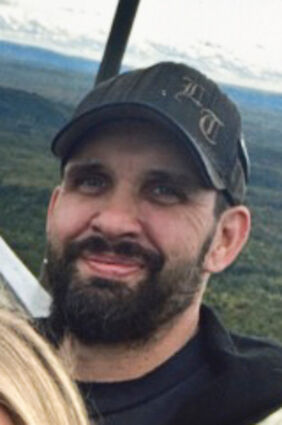 IRONWOOD, Mich. - It is with great sadness the family of Kevin Lahti announce his passing Oct. 13, 2021. Kevin was born on Aug. 23, 1976 to Steve Lahti and Terri Rosen Aimers, growing up in Ironwood, Michigan. Kevin went to high school at Luther L. Wright High School and graduated the class of 1994.

Growing up, Kevin enjoyed baseball, golf, four-wheeling, boating, weightlifting, skiing and coaching boys Little League. Even when young, Kev had a gift for bringing people together. Always the life of the party with his charisma, charm, and that smile. If you ever heard him even think about doing something, you could be sure it was going to happen. Even when he was young, it was apparent that he was a born leader.

In early 2000, he met the love of his life, Amy, they married on Valentine's Day 2004. In 2005, they had their first born, Tia Lois. The joy of having a daughter brought along the arrival of his second-born, Breleigh Jane in 2008. The birth of his girls turned an already caring man into a deeply compassionate husband, father and friend. Everything he did from that point on would revolve around his girls. He would do anything to bring them joy and to show them how much they were loved.

Kevin was all about making memories. Every holiday was very special to him and his girls. From carving pumpkins to reading "The Night Before Christmas" to them and being the one to always hid the Easter eggs, he poured all his love into those special moments. Kevin enjoyed everyday activities, like playing cards and Yahtzee with his girls and taking them on wrecker calls. Kevin also enjoyed bringing friends and family out to his camp where many special memories were made. As the kids grew up, they got very involved in sports and he supported them any way he could. He started out coaching Breleigh's basketball team and then moved on to his favorite sport, softball. He was blessed to be able to coach both Tia and Breleigh in softball. Coaching his girls and their teammates brought Kevin so much joy. He poured his heart into coaching and mentoring his players was one of Kevin's great passions. His love of the game was equal to his love of the players. Kev's recent team included Lahti Towing U-12 Little League team and the Gogebic Range U-14 Team. Through his many years of coaching, he inspired so many young athletes.

Kevin started working for the family business at 16 years old, purchasing his first wrecker at 24. In 2012, Kevin decided to branch out on his own, starting his business Lahti Towing and Sales. Kevin loved the people he worked with. They were not just his employees, but they were family, especially Jay Edyvean. Kevin was always ready to lend a helping hand and his job allowed him to assist countless customers who were in a bind. He truly enjoyed that part of his job the most, creating genuine friendships along the way. Kevin pulled many people out of the ditch, literally and figuratively. He was so proud to support his local community donating to so many area causes. One of his favorite sayings was "shop local."

One of Kev's best traits was the ability to bring people together and make them feel welcomed. Kevin was the guy who got the party going, whether it was to put a roof on his house, build a playground for his daughters, or just have a get together. He made a few calls and dozens of people were immediately there with a moment's notice. He always loved to make people laugh with a good prank. You knew you were "in" if you got pranked by Kevin.

Kevin was kind, caring, and determined to make life easier for those he loved. His favorite things were his family and friends. He looked at each day as an opportunity to make a new friend. Saturday mornings at the shop were a special time for these connections to happen. All of his loving ways will be greatly missed.

Kevin is survived by, Amy, his wife of 22 years; along with their children, Tia and Breleigh. Kevin is further survived by mother, Terri Rosen Aimers (Mike), and father, Steve Lahti (Lori); father- and mother-in-law, Peter and Becky Ellos; grandparents, Geri and Bernard (Butch) Rosen; siblings, including Cassie Stewart (Ralph), Jake Novascone (Jessica), Nichole Lahti, Rachel Lahti (Erik Allkins), and Nick Lahti; sister-in-law, Tara Ellos; nieces and nephews, including Landon and Maddox Stewart, Kezia, Zeke and Raina Novascone, and Aubrie and Ty Anderson; and other family including Raymond "Howdy" and Yvonne Novascone; Grandma Helen Novascone; and numerous special aunts and uncles. Kevin had an endless list of friends he loved dearly, far too many to name.

He was preceded in death by grandparents, Robert and Lois Lahti, and Arthur Novascone.

A memorial service will be held on Saturday, Oct. 23, at the Memorial Building in Ironwood. Visitation will be held from 9 a.m. to noon, with a service to follow. A luncheon will be held at the Cold Iron Brewing following the service. As an expression of sympathy, any memorial contributions will be set aside for Kevin's beloved daughters' education as well as funding future youth athletics.

The family would like to express their sincere gratitude for the compassionate doctors and nurses that he met along the way at the Mayo Clinic in Rochester, Minnesota.

The family has chosen McKevitt-Patrick Funeral Home of Ironwood to assist in the service arrangements.