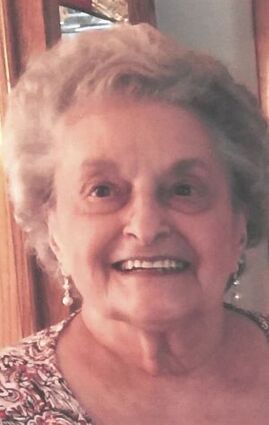 Marge was born on Jan. 31, 1926, in Hurley, the daughter of Luigi and Flora (Verdoni) Fontecchio. When she and her brother were very little the family moved to New York during the time her father was employed working on the Empire State Building. She attended school in Hurley through the 11th grade and completed her senior year in Ironwood, Michigan, where she was a 1944 graduate of Luther L. Wright High School. She stayed very close to her classmates from Hurley and Ironwood through the years and was very involved in both school reunions.

Marge worked various jobs over the years including house cleaning, hair styling, the Candy Apple Factory, and Carlson's grocery store both in downtown Ironwood. She was employed at the Red Owl grocery store in Ironwood for 20 years as a checker and oversaw ordering and displaying over-the-counter products until her retirement. She enjoyed meeting and greeting people and developed many fine friendships while working there.

Growing up during hard times, in a multi-family household with her mother, brother, aunts and five cousins, Marge learned about responsibility and hard work at an early age. She was a little girl in charge of paying the rent, buying groceries, doing household chores, and taking care of the younger children. Marge was also given a very important task at age 9 when she was left alone for the weekend to take care of her newborn cousin. Her family dedication continued after graduation as she traveled to Detroit to be with her aunt and help take care of her two little cousins. When her aunt was working, her job was to babysit and when her aunt was home Marge went to work.

Marge was engaged to Tauno J. "Slick" Makinen prior to him joining the U.S. Army. While he was in the service, he had his monthly checks sent to her. Money was not easy to come by and he felt she may need it to get along. (When he returned, he was amazed to find out she had saved every check!)

On July 25, 1944, Marge and Slick were married in Chicago at City Hall, while he was on leave from the Army prior to his deployment to Europe during World War II.

When Slick was on the front lines, he received a package from Marge. It was quite the surprise as she sent a loaf of Italian bread hollowed out and inside that space was a bottle of his favorite brandy! It brought much-needed warmth from the freezing temperatures for him and his fellow soldiers. After months of battle, while on guard with another soldier, the bombing started, and Slick was seriously wounded. After several surgeries and recovery time, he was honorably discharged. He and Marge spent time in Detroit where their son was born but there was no place like home, so they came back to Ironwood and a while later their daughter was born.

Family and friends were very important to Marge and Slick. Their door was always open, and everyone was welcome. Marge spent many hours making sauce, ravioli, lasagna, gnocchi, homemade pasta, meatballs, and a wonderful Italian soup called square soup which was a recipe from her mother who described it as a "poor man's soup" during those hard times. Marge was also talented in making amazing pasties, canned foods, and awesome desserts. Everything she made was always in demand and she made sure everyone's favorites were always there. No one ever left their home feeling hungry.

There were many camping trips, fun times, and pots of "sticky spaghetti" shared by the Makinen's with Tom and Marian Wasley and families over the years. Janice and Brenda were like sisters. Marge considered Brenda her "other daughter."

Marge loved to travel. She and Slick and her friends went to Italy and Finland for their 25th anniversary in 1969. They were not successful in finding Marge's relatives, but found the house Slick was born in and were able to spend time with his grandmother and cousins making it a cherished trip.

They also enjoyed trips throughout the United States to visit relatives and friends. Marge and a close friend also took a trip to Hawaii, and she took several trips to Las Vegas with friends and relatives to see shows, gamble, play Bingo and enjoy the buffets. Marge loved to play cards. She was in card clubs where they took turns playing at each other's houses, and Smear and Cribbage leagues. Later on, Bridge became her favorite and she was an excellent player coming in the first place often. When her sight became an issue her favorite pastime ended which was a very hard change for her to accept.

There were countless celebrations at their home over the years including holidays, birthdays, and cocktail parties. Treasured memories that family and friends will always cherish.

Marge and Slick spent 59 wonderful years together until his passing in 2003. Their love of family and friends was deep. Every person in the family, extended family, and friends meant very much to them and they were always there when needed.

The family would like to thank the staff of the Sky View Nursing Center for the outstanding and compassionate care Marge received during her time there and they include Alaina, Stephanie, Katie, Anne, Barbara, Jessica, Liisa, Joy, Dawn, Shauna, Patti, Shannon, Sally, Marcella, Paula, Peyton, Kasey, Kylee, Dyan, Audrey, Amber, Patricia, and making sure Marge had the foods she liked which was much appreciated were Jeanette, Dale, Katie, Maia and Mary. Thanks to Marge's hairdresser, Annette, for always doing a wonderful job and to her roommate, Delores, for her kindness and friendship.

Even though her hospice care was for a short time, it was very important and needed care given for her comfort for which we all were very grateful. Thank you, Paula, for all your time with Marge, for our calls with questions to you and Mary, and to Kerry, for the time you spent with Marge giving her all the personal care she needed.

In lieu of flowers, donations can be made in Marge's name to Regional Hospice Services and Palliative Care, 216 E. Aurora St., or Our Lady of Peace Catholic Church, 108 S. Marquette St. or HOPE Animal Shelter, 590 Easy St., all of Ironwood, MI 49938; or to a charity of your choice.

A memorial service will be held in the spring when the grass is green, and the flowers are blooming.

The family has chosen McKevitt-Patrick Funeral Home of Ironwood to honor Marge's legacy of life. You can leave a condolence or a tribute at mckevittpatrickfuneralhome.com.