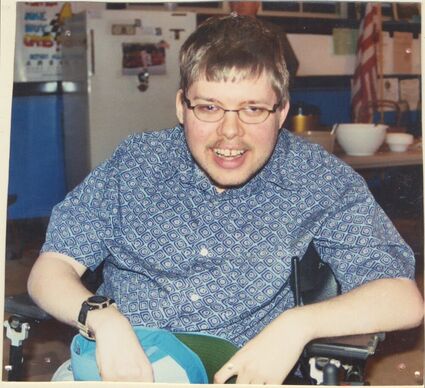 He was born Jan. 15, 1975, to Dennis and Susan Kontny. He was 2 months early, weighing 3 pounds, 6 ounces. He was a fighter. He was in the hospital for a month before he could come home at the required weight of 5 pounds.

His grandparents, Millie and John Heikkila, helped to care for him the first year while Sue went to nursing school. Needless to say, they became very close and remained that way the rest of their lives.

Ryan had cerebral palsy and was in a wheelchair, but he was happy and content, and knew he was loved.

He graduated from A.D. Johnston High School in 1994. He went on to Gogebic Community College and graduated in 1998 with an associate degree in applied business. It wasn't easy, but he did it. He enjoyed riding the Blue Bus to school and made friends along the way. Everyone at the college was nice to him, especially the cafeteria lady who helped him get lunch.

Ryan never complained. If you had to care for someone, Ryan was the best. He never asked for much, but if he did, you tried your best to get it for him. That's why Aunt Kathy went all over Minneapolis looking for 50th anniversary Hot Wheels cars when he sent her a list of what he wanted.

Ryan was predeceased by his grandparents John and Millie Heikkila, and Frank and Ann Kontny; and aunt and uncle, Rita and Red Oman.

A memorial in honor of Ryan will be held Wednesday, Nov. 9, at 11 a.m. at Cornerstone Church in Ramsay. Wear something red if you have it; it was his favorite color. A light luncheon will be served in the church basement after his remembrance.

Thanks to Pastor Todd Winkler for allowing us to use the church and for agreeing to say some encouraging words of faith and hope. Thanks to Jerald Rocco of Lakeside Memorial Chapel for assisting the family with arrangements and for always being the kind, compassionate person that he is.