MELLEN, Wis. — Mercer fought back from a 20-point deficit to take the lead, but they couldn’t finish it as Mellen won the WIAA Division 5 regional semifinal 68-60 Friday night.

“We made it interesting,” Mercer coach Adam Miller said. “I told the boys, if you’re going to go down, you better go down swinging.”

Mellen played four corners when it took that 20-point lead. Mercer forced them out of it. They had multiple opportunities to add to their one-point lead but it didn’t convert.

“I thought if we could get another shot while we were making that run, we would really get the momentum,” Miller said.

Mellen played a diamond-and-one in the first half, which was a factor in building that big lead.

“I thought they would go into a triangle and two, we practiced against that, first time we saw a diamond and one,” Miller said. “Kobe (Hiller) had a tough time and Alex (Schmidt) really had a tough time in the beginning. We had a lot of open looks from our No. 3, No. 4 and No. 5 guys, but the ball wasn’t going in the basket. It just really didn’t work out in that first half.”

Mercer finished a special season at 14-10. 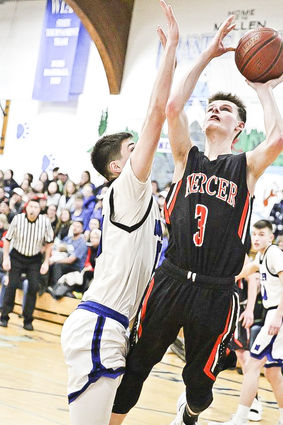 “It was a hell of a season,” Miller said. “You win one playoff game, it’s pretty good, actually it’s really good and we had a shot tonight. They hit shots in the first half we couldn’t get over. We got over it, 49-48, we just got ourselves in a hole like we did a couple times this year. Just the story of our year.”

“Alex had a hell of a three-year career here,” Miller said. “Tristin (Woolf), he was a senior, he worked extremely hard, he was undersized, 6-2, our center, 160 pounds maybe soaking wet, going against bigger guys all season, he played very well. Very proud of those two boys, they had great careers here.”

Miller wished Mellen luck against Luck at home in tonight’s regional final. He thinks Luck is the best team in the regional as it plays Division 4 teams all season.