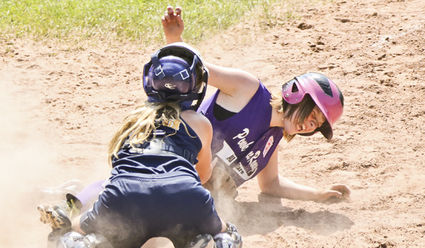 Penokee Range’s Mackenzie McCorkle, right, slides into home plate Sunday at Steiger Field in Bessemer. She was called out on the tag by the Negaunee catcher on what would have been the go-ahead run in the top of the sixth inning. Negaunee went on to win with a run in the bottom of the sixth for a 6-5 victory in the Little League District 11 ages 11-12 softball tournament.

Penokee plays Portage Lake tonight at 5:30 p.m. here. The loser is eliminated from the tournament, but the winner advances to play Negaunee in a championship game Tuesday at 5:30 p.m. Negaunee can take the tourney with one win, but its opponent needs to beat Negaunee twice in the double-elimination event. The second game would be Wednesday.

Penokee Range is made up of kids from Ironwood, Hurley, Bessemer and Wakefield.

Negaunee led 5-2 in the early goings Sunday, but Penokee Range fought all the way back to tie the game at 5-5 in the sixth inning. Penokee’s potential go-ahead run, Mackenzie McCorkle, was thrown out at the plate in a very close play in the top of the sixth.

Negaunee’s hit with two outs and two on base scored the game winner in the bottom of the sixth.

“It was a heartbreaker,” Penokee manager Amanda Niemi said. “What a game. Very proud of my girls.”

“Hanna pitched one heck of a game and they all played well,” Niemi said. “Just need to swing the bat some more (today). One day at a time. We will face Portage Lake and then we hope to be seeing them (Negaunee) again on Tuesday.”

McCorkle went 4 for 4 on her birthday for Penokee. Martina Anderson was 2 for 2.

Malorie Munson picked up the win for Negaunee. She had 14 strikeouts with four walks and seven hits allowed.

Penokee started the weekend with a 15-4 win over Baraga County Saturday. Haley Halvorsen was 4 for 4 for Penokee. Megan Peterson picked up the win. She had five strikeouts and she allowed nine walks and three hits.